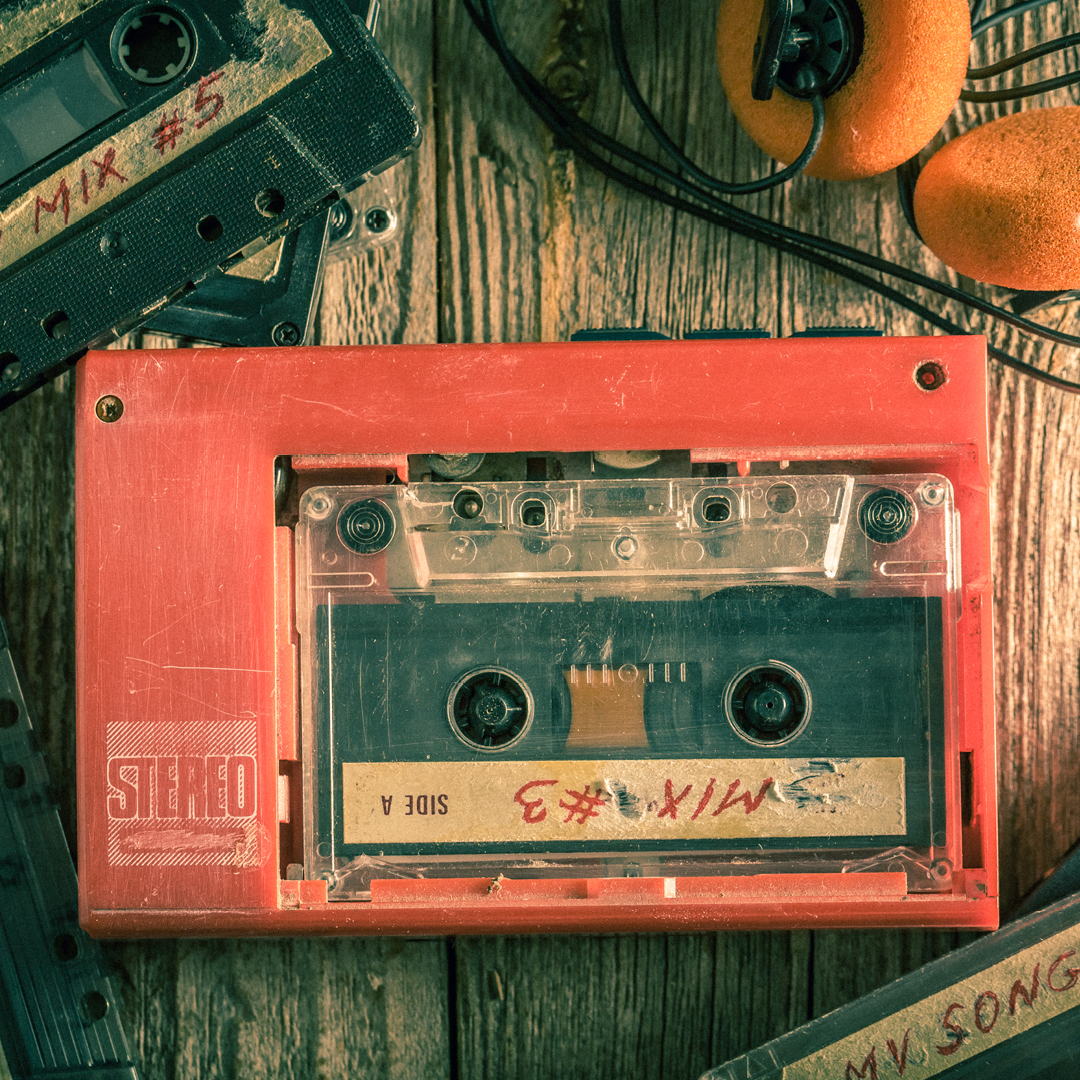 The year 2003: a poorly ventilated music store, a long row of old wooden boxes which are about waist-high. In there we have got hundreds of CDs which are roughly sorted by genre first and then alphabetically. The price of a CD is EUR 14.99 and contains a booklet of unknown quality. It includes 12 songs and maybe a bonus track. The chance that a purchased CD does not meet your own taste is high because you are not able to listen to most of the songs anywhere beforehand, the first time you hear them is on this CD. You can call it a blind purchase. The front artwork of the booklet, the genre-sorting of the shop owner or the band name, the buyer has to trust in that.

Change of scenery, the year 2019: a living room, the stream on the PC: an old Ashbury album, free of charge. At the side of the screen, the streaming platform is recommending similar artists. This recommendation is based on an algorithm that analyses musical tastes. The streaming platform is suggesting Fleetwood Mac, the cover artwork is awful but users still listen to it and love the songs. The streaming platform is also showing tour dates. A month later, their concerts are sold out, despite being a band which many have already passed its zenith. Our music consumption has changed. The way of publishing music has changed. How do artists deal with this?

Tape trading was not a normal 'exchange' of cassettes. It was rather the transfer of music to an empty cassette, a copy. The word trading meant copying each other's (original) cassettes. I give you mine, you give me yours. In the end, we 'swapped' music with everyone still having their own original. That is why in the 80s, many bands played their songs onto cassettes themselves and gave free copies to the fans. Fans kept 'swapping' the tape and a kind of snowball system developed: If I give my tape to three people, they will give it to three other fans. The best case scenario was that small bands were able to reach a broader audience. Bands like Metallica would have probably never become popular without tape trading in the early 1980s. Record companies also used these tapes to get new artists. The bands never saw any money for this tape trading. This was, however, never the plan.

When cassettes slowly died out and CDs – and then MP3s – dominated the market, there was a long period with illegal pirate copies and file sharing. Anyone who wanted music got music and without paying for it, just a little bit of a guilty conscience. Nowadays, we are streaming instead. This only cost a little (or nothing) and offers unprecedented flexibility. A sly person might say that music streaming has helped thousands of music listeners out of illegality. Publishing music has become child's play. On many streaming platforms, bands are able to offer their music without paying for CD pressing or applying to 17 record companies. However, has the situation for musicians improved? Tommy Newton is worried:

I have a clear attitude towards streaming: it is the end of an artist. There is finally only one fraction that earns money: the record company. They get 90% of the income of the streaming provider if they have a band under contract. When I tell people about CDs, all I hear is: Why? I can listen to it online.

People do not think about how much work and money went into the recording. That is why I am happy about the vinyl boom because the artist benefits from it.

I'm not saying the internet is bad. YouTube is a great platform for music videos. And yes, streaming allows the artist to get noticed by event organisers. However, I will never become a fan of it. If we also combine streaming with Pay2Play, things will become very gloomy.

Whether we like it or not, digital channels are definitely a convenient and often a fast way of publishing.

For bands, the problem with music streaming remains. For thousands and thousands of streams, there is only a small amount of money going to the musicians. Streaming services pay less than EUR 0.01 per stream to the rightholders, i.e. record companies. Of this cent, often only a single-digit percentage or if you are lucky about 10% goes to the artist. For illustration purposes:

This means that with 100,000 streams which is an unattainable number for many bands, the artist will earn EUR 100.

Live on it? That is impossible. However, it has always been difficult for musicians to live solely from the sales of their sound carriers.

Free streaming is the smallest hurdle ever for consumers. Smaller than the purchase of CDs, pirate copies, file sharing or tape trading and it often provides a higher sound quality. I do not have to make myself liable to prosecution, nor do I have to spend EUR 14.99 on a CD if I want to 'try out' an artist. As a result, musicians like the minimalist neo-classical pianist Nils Frahm suddenly benefit from a monthly audience of 2.1 million people. In 1998, you would have not had so many people listen to a CD by a relatively special pianist and recommend it. We are listening to streams over and over again. The artist gets money for them every time we do, while the CD is a one-time purchase. Bands like Fleetwood Mac, who have sold many CDs in the past, are still getting money for their old songs because we are streaming them.

Nils Wittrock, singer and guitarist of The Hirsch Effekt

I think we have to question our mentality. Just because we do not pay for something, does not mean it is worthless. Fortunately, we do not have to pay for the air that we breathe which I believe is valuable. The question is how bands get back at least part of their financial and time commitment.

We solve this through the crowdfunding platform Patreon. Fans and supporters can register themselves and pay a small, self-determined amount every month.

In return, we make regular podcasts which our fans and supporters are able to listen to or see before anyone else. Even though, this is associated with extra costs, this is kept to a minimum thanks to an endorsement. This does not finance a life, but it does finance more than just our rehearsal room.

In the musical underground, many fans still buy CDs, even collect them. They also buy patches, buttons, shirts and even vinyl again. The first contact with a band is usually a song on a streaming platform. Just like with tape trading in the past, streaming makes it possible nowadays to receive a large number of different music recommendations at the same time without great effort. The CD, the patch, the button, the vinyl or the ticket for the gig is only bought by fans after they have heard the band. In 2017, according to the German Music Industry Association, 3.3 million vinyl LPs have found their way from the store to the record collection. This is an increase of 1,100% compared to 2003 (yes, this is correct). After all, every third buyer was between 20 and 39 years old. Nevertheless, the development is controversial, even among musicians:

Tammo Reckeweg, guitarist and singer of the band LENNA

You cannot resist. Looking at the billing of the streaming platforms, it can put me in a bad mood. However, the important thing is to be available. The live business becomes more and more important. You just have to play a lot of gigs for your money.

The CD is your business card, your autograph card, your souvenir. Not just a sound carrier, but merchandise.

When we sell CDs at the location after our concerts, I can look people in the eyes and talk to them. That is the counterpart to the anonymous stream.

As a musician, it is annoying that something new is coming yet again. You have just adapted and ask yourself the question: what else do I have to finance? "Oh, you are not on this platform or that platform? Oh, you are not doing vinyl?" It sucks. For me, CDs have worked perfectly well so far. I still think it is good that there is a physical end product.

Maybe, we have to get used to the fact that bands will live from performing, selling merchandise and using platforms like Patreon in the future. Would it be so bad, if bands would use it to create cool, high-quality designs for CDs and vinyls with real booklets and print band shirts that we really like to wear?

If you still want to benefit from streaming, rapper Kesh has some tips on how to use streaming in a sensible way.

If it is possible, do not release several songs on the platforms at the same time, or a whole album, or a whole EP. Publish the songs one by one, about two weeks apart. Use social media to promote the respective song for about two weeks. Enjoy each song. Thus, you would have not played all your trumps at once. The reality is that we mainly listen to playlists nowadays. If you publish the songs one by one, the right people may put them into their playlists. It is also advisable to look for a platform distributor that offers fair conditions. It is good to have a tariff where you pay once a year and then you can upload as much as you want.

Finally, only a very rational consideration remains: no matter whether we as artists find streaming good or bad is a question of perspective and mentality. It is important that artists think about it at all and then find a solution that feels right. If you as an artist think that a medium which can be held in your hands is important, then you should not ignore this feeling. Hence, a lot of love will flow into the design of the cover or artwork. On the other hand, no artist has to cling to vinyl just because it is currently in again. Streaming remains a matter of attitude and if you look at it in black and white, that is a little too convenient.