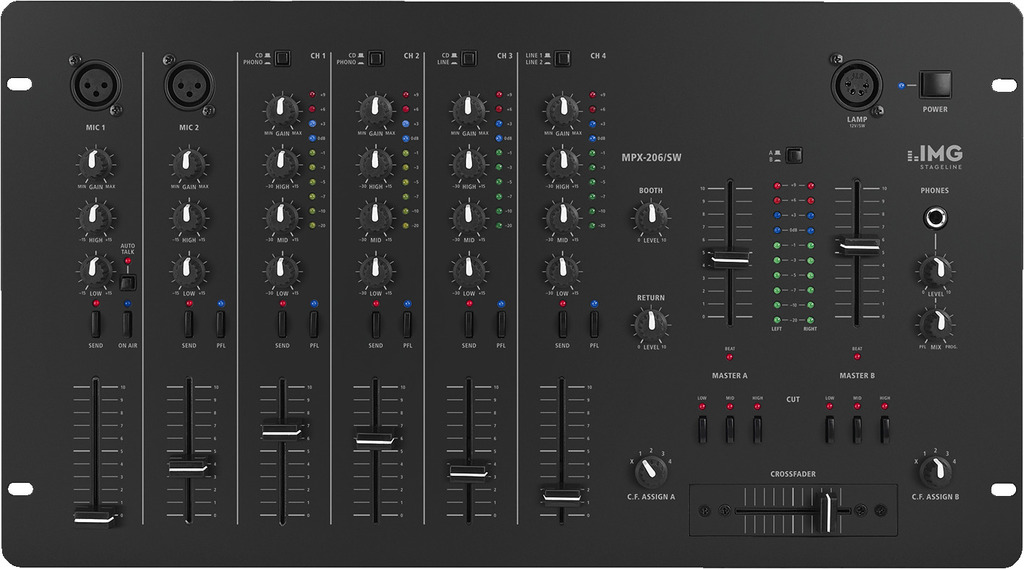 The focus of this article is the

As a beginner in the field of mixing and recording, have you ever tried to find out how a mixer works? What you can or should be able to do with it? How you initially start to operate these things? We have, and we can honestly say that we have been overwhelmed by a flood of abbreviations and technical terms. Therefore, we have summarised the basics of mixing for beginners.

To explain a mixer, we take the MPX-206/SW as an example. We have deliberately chosen a DJ mixer to give both beginner DJs and other musicians a general idea here.

These are the basic components of a mixer

Why do even small mixers have so many potentiometers (389), buttons and controls? The reason for all these buttons is that each individual channel comes with a complete set of controls called the channel strip. The good news is that if you understand what the buttons do for a particular channel, you will also know how the buttons work for any other channel. In fact, nearly all analogue mixers are of similar design.

To cut a long story short: your equipment must enter the mixer somewhere and something has to come out of the mixer at some point. For this purpose, most mixers provide you with a variety of inputs and outputs. Taking the DJ mixer MPX-206 as an example, this may look like this (do not worry, explanation will follow). With standard live or studio mixers, this is rather simple because they mainly feature XLR inputs and outputs which facilitate connection of multiple microphones, for example.

Inputs of a mixer:

Outputs of a mixer:

Practical example:
It is the most typical function of a mixer. This is where you can select the volume level for your different input sources, e.g. samples or instruments. 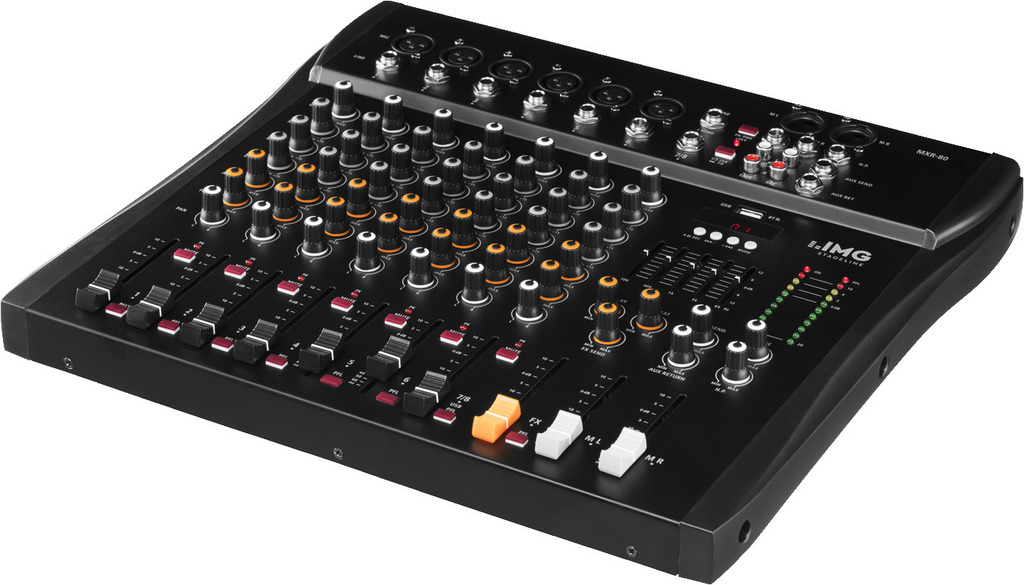 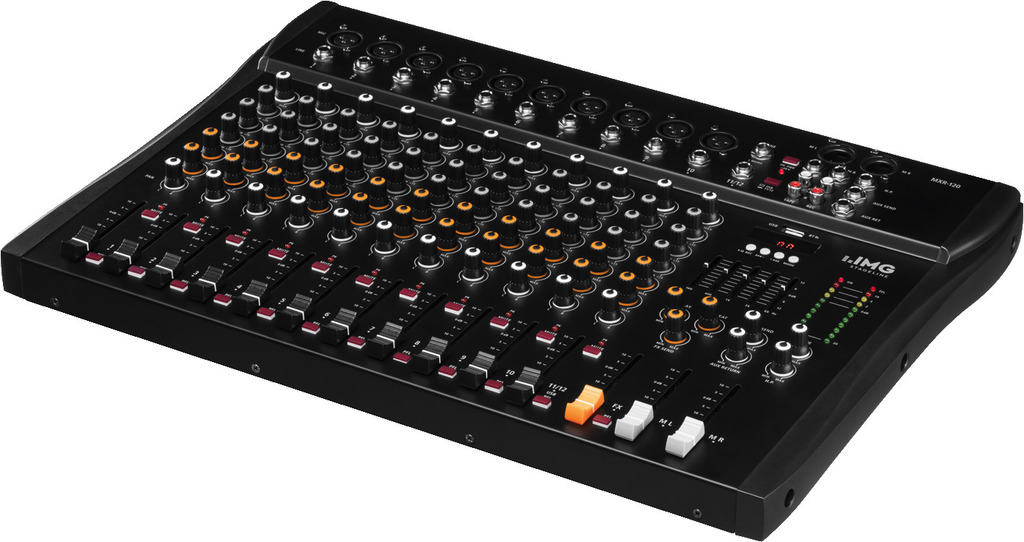 Practical example:
DJs as well as musicians in the rehearsal room and studio or sound engineers in front of the stage can readjust the sound which subsequently reaches the audience. If the setup does not feature a bass guitar, a guitar track in the bass range could be emphasised, for example.

The gain controls determine the input amplification of the respective signal. Turn it up if you need more power for a signal which is entering your mixer. But beware of gain staging: too much gain can lead to distorted and overamplified signals.

Our example shows two possible master channels: A and B. The V(olume)U(nits) meter shows the stereo level of the respectively active master channel. You can switch the master channel using the centred button above the master faders. The colours of a VU meter are similar to a traffic light: red does not stand for 'dangerous', it means 'break'. If the VU meter is in the red zone, it means that the level is already too high and not just before overload, as often assumed

Practical example:
If the levels are too high, reduce the gain on the individual channels. For loud sections, the level values should be in the 0 dB range.

These keys are used to suppress certain frequency ranges. If the key is pressed (HIGH for the high range, MID for the midrange, LOW for the bass range), the level of the respective frequency band is lowered considerably. Please note that the keys refer to the two master faders mentioned above, not to the crossfader mentioned below.

Practical example:
A strong cut of certain frequencies changes the timbre significantly. Some mixers feature CUT buttons for individual channels. With our example, it is more of a function for DJs who can use it to insert a new track without bass (see next item: crossfader) and then activate the bass again as an additional effect.

The crossfader is primarily a tool for DJs. You use the potentiometers on the left and right to select a channel. Hence, you choose 'C.F. ASSIGN A' and 'C.F. ASSIGN B' to select which channels you wish to 'crossfade'. With the fader you are then able to smoothly and evenly crossfade from one channel to the other.

Practical example:
The crossfader is an indispensable tool for DJs if one song is to fade into another. Bands can also use it to add synths or ambient samples or to experiment a little.

Microphone inputs for DJs and talkover

In this case, Mic 1 and Mic 2 are balanced XLR inputs you can use to connect a microphone. The difference is in the details: Mic 1 features a button 'Auto Talk' at the bottom of the channel strip. This automatically lowers the overall level by 12 dB if the DJ makes an announcement with the Mic 1 microphone.

Practical example:
Mic 1 is mainly used for announcements during the performance. Mic 2 is available for other sound sources which are to be picked up by microphone. The corresponding connections for these channels on the back panel are deactivated if something is plugged in here.

Adjusting the headphone levels for monitoring

Your headphones are connected to this socket. The 'Level' potentiometer underneath it controls the volume level of the signal which you hear on the headphones. The 'Mix' potentiometer underneath it provides two options: you can either hear the current stereo master (PROG) or you can hear a single channel of channels 1-4 without fader settings. With the PFL buttons below the channel strip of the respective channels, you select which channel you can hear.

Practical example:
This is where you can specifically listen to how each of the individual channels sounds.

If there is a monitor output, this is where you control it. Usually the potentiometer is simply called 'Booth', just like the corresponding output on the back of the mixer.

Practical example:
If you want to use the mixer to hear the sound yourself during your work, this is where you can select the volume level. The booth can be the DJ booth, the producer booth in the (home) studio or simply a speaker somewhere.

PFL and SEND buttons below the channel strip

This is where you can select for each individual channel if the signal should be forwarded to your headphones without the fader setting. PFL stands for pre-fader listening. You can also select if the signal should go to the SEND output. Or both. Thus, you can apply effects to some input channels and not to others.

Practical example:
If you insert an effect which is only intended for a single line signal, you can just activate the SEND button on this channel accordingly.

Are you sending out a signal via the SEND output which passes through an effect unit and then comes back into your mixer? With this potentiometer, you control the level of the signals coming back from the effect unit.

Practical example:
If you add a reverb effect to one of the line signals via a send and return loop, you can finely tune the volume level of the effect. The effect will only be applied to those signals sent via the SEND button.

What is the advantage of a mixer compared with an audio interface? It provides much more control. With a mixer, each individual input channel features more control option for what finally reaches the DAW on the computer. The mixer is where your audio signals come together, are mixed and processed and then sent to one or multiple output channels. Mixers are perfect for recording instruments which are played simultaneously and premixing them directly.

An interface has also got a few advantages: it is often very small and fits into any pocket (like our MX-1IO). Interfaces are also perfectly adequate if you only want to record one track at a time and do not need the mixer's full range of functions. Especially for small and portable home recording setups, an interface can sometimes be the better choice.

How to connect an analogue mixer

Hopefully, you have got a better idea now of what you can do with a mixer at a basic level. You can find an overview of mixers from IMG-STAGELINE here. If you want to record music yourself or if you have to choose between an analogue and digital mixer, you will find even more inspiration in our magazine, for example.